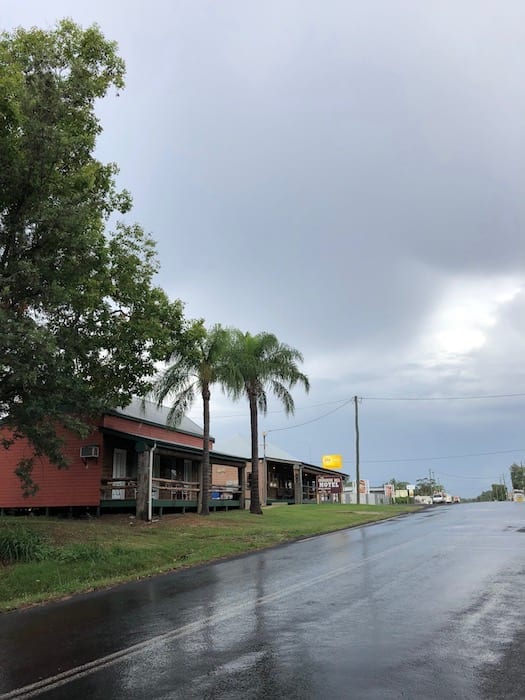 Condamine is on the Western Downs in Queensland, perched on the banks of the Condamine River. Not surprisingly, big floods are an integral part of the town’s history.

Originally, the river crossing was a logical stopover point for bullock teams and travellers heading for places like Longreach and Roma. So the settlement grew from this. Condamine then developed further, as farming was established in the region.

Condamine is just on 200km North of Goondiwindi. Coal seam gas fields lie to the North, East and West of the town. So Condamine sees plenty of through traffic, mainly road trains, mine vehicles and the occasional farmer.

Somehow this fertile country is seen as prime gas field country, rather than a critical food bowl. Still, you will see plenty of crops and beef cattle.

As out-of-towners, we witnessed an interesting dynamic at the local pub. Miners live across the road from the pub in new self-contained apartments. So they go there for dinner.

We felt a definite us and them vibe. The locals from surrounding farms congregated together in the bar or out the front. On the other hand, the miners seemed to almost slink into the dining lounge, order dinner and eat alone or order take-away and disappear back to their apartments.

There was a distinct feeling of an uneasy truce between the two groups. And I can understand both sides.

On one hand the farmers have no say over who comes onto their land, builds roads through their paddocks and erects fences to keep them out of their own land… basically the gas companies can do what they like.

On the other hand, the people who work for the gas companies are just doing their job, trying to earn a living.

Also, there’s no question the gas companies are bringing money into the region. The pub and apartment owners must be rubbing their hands together. And service companies must be loving the gas boom too. However, you won’t see any service companies in Condamine. All the road trains loaded with goods and equipment trundle through town, bringing loads from afar.

And what’s the long term cost to the community? Toxic spills, contaminated water tables, depleting bores, leaking gas wells, methane bubbling out of the Condamine River, industrialisation of prime cropping and beef country… what happens to the locals when their properties are no longer viable?

Zoom in and out on the map below, especially to the East of Condamine (Condamine State Forest for example). All of those dots with roads leading to them are CSG wells. If that was your land, how would you feel?

This is a complex issue. So far the big gas companies seem to be winning the battle.

Condamine’s caravan park is fairly basic, but has all the amenities you need. Clean showers, shady campsites, power and water. Oh, and plenty of shady trees and green grass!

The lady who runs the park is lovely and clearly understands what travellers are looking for in a van park.

We met an old bloke there who owned an enormously fat dog! He was an interesting character and had travelled Australia extensively. He had decided “everything is sh*t now”, meaning commercialisation plus all the rules and regulations had destroyed his nomadic lifestyle. We could see his point. We had a few yarns with him and he was always ready with a good story.

Across the road was a local CRT (Combined Rural Traders), which is basically a Bunnings for farmers. We had broken a hose fitting and it was an odd size. I was willing to build one up from brass fittings, but the two blokes in there decided that wouldn’t do.

So the two of them spent about 15 minutes looking for something that had the fitting we needed. Finally they found one on a sprinkler, took it off the sprinkler and gave it to us for the princely sum of one dollar! They were lovely blokes who couldn’t do enough to help us. Typical helpful country attitude, a refreshing change from the cities.

Since Condamine is perched on the edge of the Condamine River, the locals are used to floods. And occasionally these floods are massive. Like the gas workers and the locals at the pub, you can almost sense an uneasy truce between the river and the town.

The River Wins Out

The Condamine River has a huge catchment. Water from the western slopes of the Border Ranges around Toowoomba flow into the Condamine. Then it snakes about 500km through the Northern Darling Downs, picking up water from there. Eventually this water finds its way into the Darling River.

So when it floods, it really floods. This river doesn’t do things by halves. A flood in January 2011 smashed the previous record by a few metres and the whole town had to be evacuated by helicopter. A few weeks later, the river peaked again, resulting in another evacuation of the town.

When you stand in the park under the flood level sign, you get some appreciation for the magnitude of this flood. A level this high in such flat country must have required a staggering volume of water.

There’s a memorial in the park to those who have drowned in the river, and to those brave souls who have rowed across the flooded river to pick up supplies.

So while the river flows sedately past the town most of the time, occasionally it unleashes its fury on the hapless town. Duck into the pub and check out the flood photos. The water levels are extraordinary.

No visit to Condamine would be complete without a look at the Condamine Bell.

Samuel Jones was living in Condamine when he had the idea to make a cow bell from a pit saw blade. Thereafter, these bells were commonly known as Condamine Bells.

Why does a cow need a bell I hear you ask? Well, in the 1800’s they were a tracking device. Say you were a bullocky with a mob of bullocks and not a fence in sight. If you attached a bell to each (or some) of your bullocks, then you’d be able to find them in the morning.

Or maybe you were a poor grazier who couldn’t afford fencing. Bells were way cheaper than fences. Simply buy a few bells and attach them to a few cows. Then when you had to muster the cattle, you could find them in even the thickest scrub from the sound of the bells. Clever!

Like many small country towns, you could easily drive through Condamine without a second glance. However, the place has a history closely tied to the river and the surrounding land.

Stay in the caravan park and have a look around. Like most country towns, the people are friendly and helpful. Stay a while, relax and get a feel for what this town has to offer.