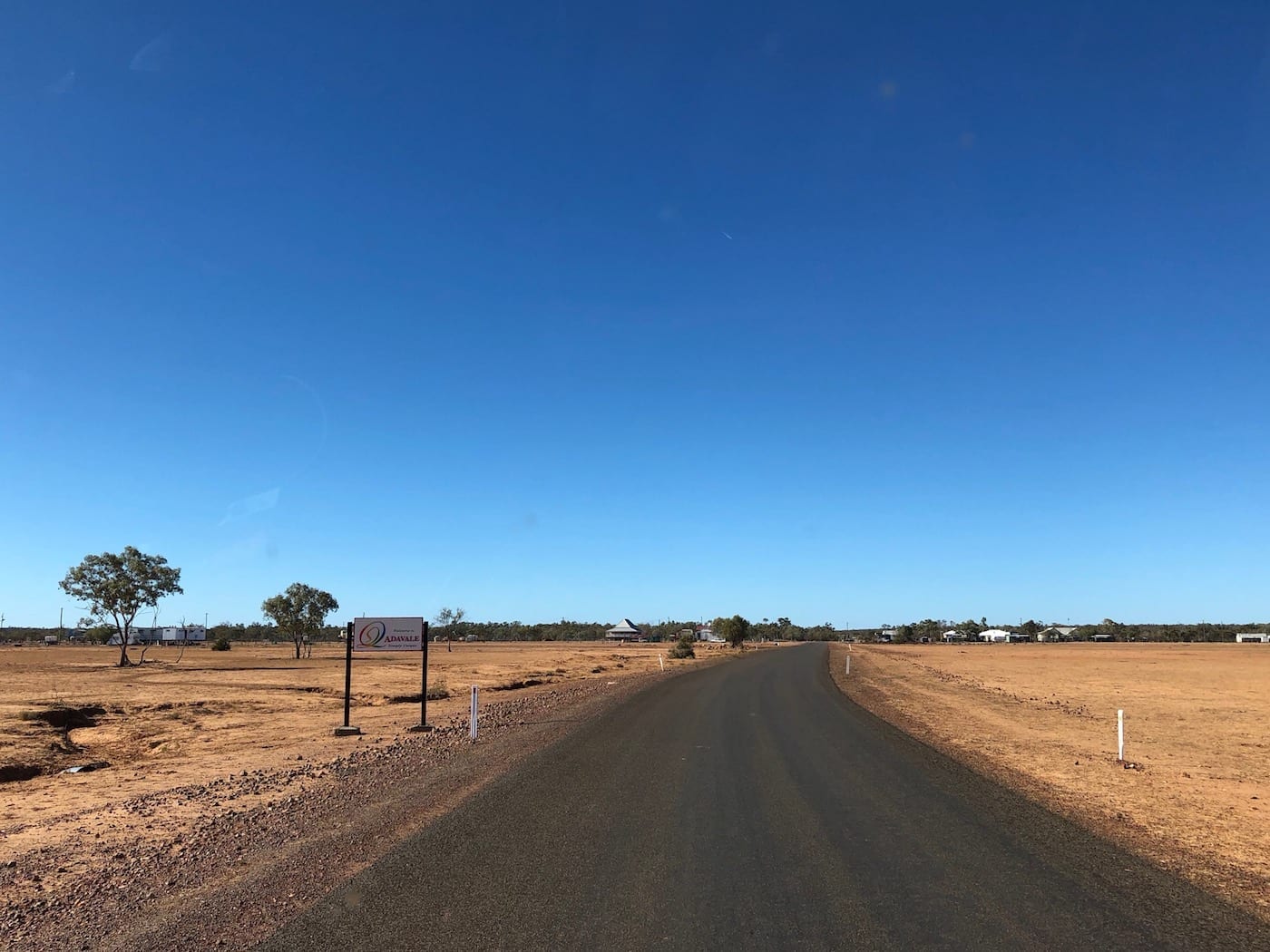 Adavale is small, really small. With a population of around 20, it’s hard to imagine Adavale was once a regional centre.

Spend a little time there though and the clues to Adavales’ former glory start to appear.

Adavale’s 120km North of Quilpie and 250km South of Blackall. See the map at the end of this article for more details.

We rolled in from Blackall, after a scenic drive on a great gravel road.

We’d been this way before, however a miscalculation saw us driving at night. This time we enjoyed all the scenery we missed last time. You travel over black soil plains for about two thirds of the way, mostly in an enormous valley. After crossing Gowan Range, you’re into mulga scrub and wide, sandy roads.

The first signs of civilisation are the crossroads, where a right turn takes you to Hell Hole Gorge National Park. Turn left, drive past the ambitiously named Adavale Airport then across a ginormous claypan.

A smattering of buildings appear and you first reaction will most likely be, “How hot would this place be in Summer?!” It almost looks like a giant has grabbed a few buildings and sat them on a hotplate on his giant giant’s stove. This place must be insanely hot in Summer.

Two buildings stand out here. One is the Community Hall. The other is Adavale Pub. Drop into the pub and have a look at the mud maps on the wall. The publican has spent lots of time locating various points of interest, which are dotted around Adavale.

A Fast Trip To The Tip

The publican was away for the day. He’d left Margaret in charge, a Bidjara woman with a keen sense of humour and an infectious laugh. Someone in Blackall had told us the old rubbish tip was worth a look, if only for the sheer scale of it.

We asked Margaret and she decided to show us the way, rather than give directions. So off she went, spinning the Magna’s front wheels in the dirt and leaving us way behind. A few rights and lefts later, she had us on a track in a paddock. Margaret pointed us in the right direction and we parted ways.

The old rubbish tip is on top on a mesa, elevated above the town and a few kilometres out. Why anyone would choose an elevated bare, flat mesa for the site of a rubbish tip I’ll never know. Did anyone consider the wind? Strange.

Now I’m not big on checking out other people’s rubbish, but this is worth a look. Remember, Adavale was once a regional centre with multiple pubs and various businesses. There must be hundreds of thousands of bottles, mostly beer and rum. And the one gallon kerosene tins… they’re everywhere!

As an aside, kerosene tins were often used in place of corrugated iron. Many farm sheds and buildings in this country have been built from flattened kero tins. They simply used what was available at the time.

Back to the pub for our next adventure…

The pub walls are lined with photos, newspaper clippings and maps. A curious set of 3 laminated photos stand out amongst a series of extraordinary images of the 1963 flood. One image is below.

To the right is a photo of the site as it looks now. To the left, the mud forts have been photoshopped to show how they would look now.

Margaret explained. Early settlers built these on the slope down to a nearby permanent waterhole, used as a water source by the Aboriginal people for thousands of years. Beyond and in front of the forts, the slope peaks then drops away to the other side.

If you look closely, you’ll see firing slits in each fort.

The settlers waited until the Aboriginal people walked up over the brow of the hill, then down the slope towards them. Then they opened fire. So people who were simply using the lagoon for their water supply were murdered in cold blood.

Unfortunately this site is on private land. However, Margaret is hoping to have it fenced with an interpretive sigh explaining what happened here.

It makes you wonder how many more massacre sites are dotted around this country.

On a lighter note, there’s stacks of photos and newspaper articles documenting how the town was partially washed away in 1963. A massive flood inundated the town and washed away many of the old buildings that were close to Blackwater Creek. This explains why the current village is just a little further away from the creek than it used to be.

It also explains the giant “claypan” we saw on the way into town. It’s actually a floodplain.

A few short sections of the old coach road lie a few kilometres out of town, just off the Adavale – Charleville Road. This section traverses black soil country, which turns into thick glue when wet. So the road has been lined with rocks or timber rails to hold an elevated bed of red soil road base.

This is thought to be the remnants of a horse-changing station for Cobb & Co coaches. The Cobb & Co route ran through Charleville, Adavale then Windorah… virtually a straight line. The bush has reclaimed most of these now. However Koss the publican is keen to find more of these change stations and turn them into a tourist drive if possible.

Cobb & Co routes had change stations every 10 – 20 miles (16 – 32km) to keep the horses fresh. Truly an express delivery service… except when they were bogged in deep mud or had to swim across flooded rivers of course!

There’s a few more drives you can do. We decided to have a look at the old town instead.

The old main street was home to lots of pubs and all the service businesses you’d see back in the 1880’s. Businesses like blacksmiths, butcher, baker, bank, shoemaker and so on. Interpretive signs along the street explain what used to lie on each now-vacant block.

Locals have created a unique outdoor mini-museum. It used to be the meat-safe, which is the place where beasts were hung to set after being slaughtered. Now it’s home to lots of old bits and pieces. Worth a look.

With the shadows getting long, we decided it was time to find a place to camp.

You can camp on waterholes along Blackwater Creek or beside the Community Hall. We chose the Hall. The temptation of a hot shower was too much to resist! Leave a donation for the Royal Flying Doctor Service if you camp there.

The police museum has some interesting information inside its tiny walls. You’ll get some appreciation for the scale of a policeman’s job in a region like this.

Wander over to the wide verandah surrounding the Hall and check out the information boards lining its walls. You’ll find loads of information and excellent photos of life in the old days.

The pub closes at 6pm and the 20 or so residents are pretty quiet. So you’re pretty well guaranteed a peaceful night’s sleep.

Adavale is a quiet, friendly outback village with plenty to see. Like many rural towns, Adavale has ebbed and flowed over the years.

It’s a window into the past, and a perfect jumping-off point for nearby Hell Hole Gorge National Park. Spend some time there. You’ll be glad you did.

Adavale is on Bidjara Country.