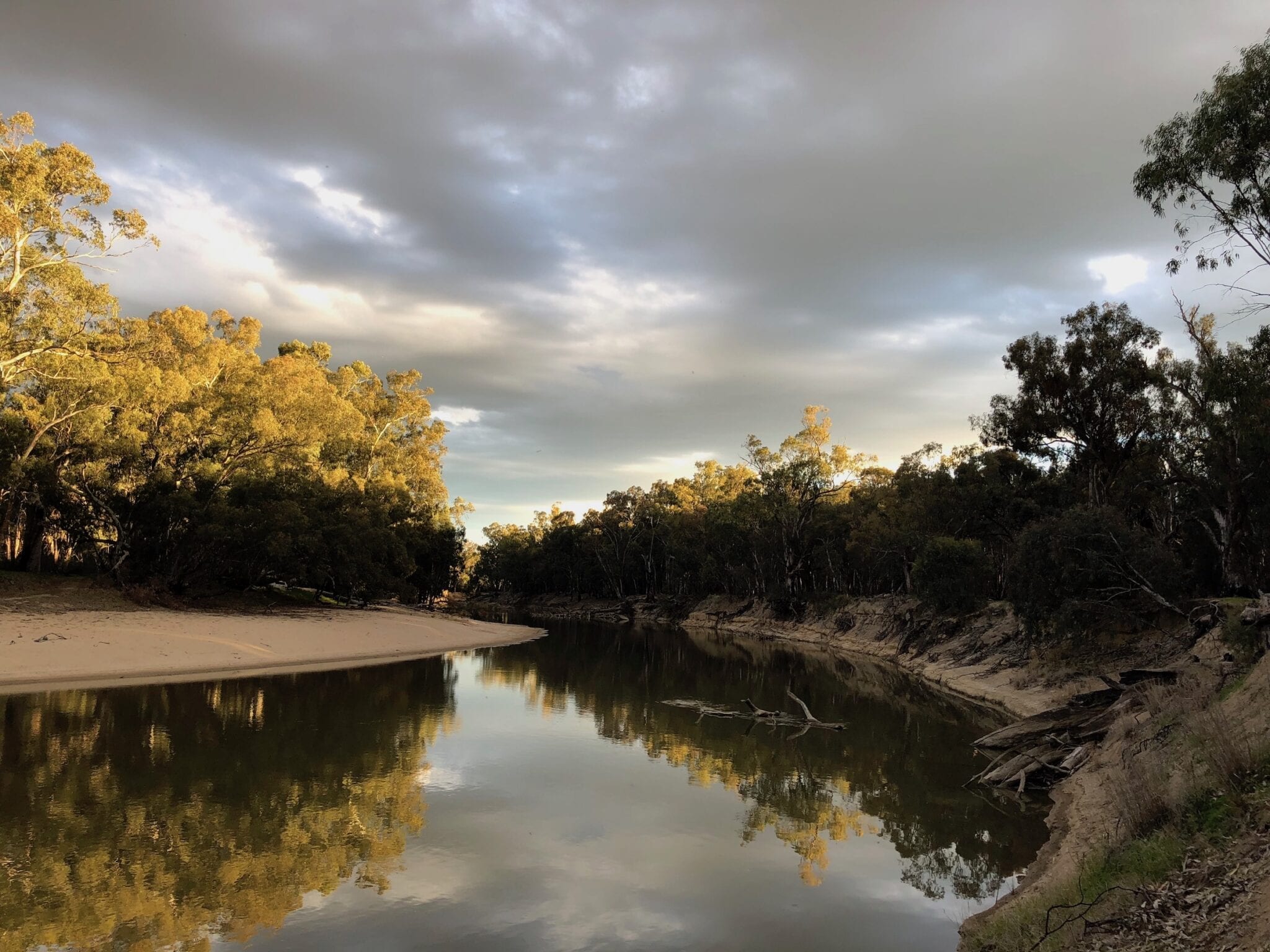 Willbriggie State Forest sits within the Murrumbidgee Valley Regional Park. If you’re heading across the Hay Plain and looking for a peaceful bush camp, this is a great option.

There’s a chain of remnant river red gum forests along the Murrumbidgee River between Narrandera and Hay. Confusingly, some are in Murrumbidgee Valley National Park, while others are in the Regional Park.

Willbriggie State Forest falls under the Regional Park umbrella. Why? No idea! All we know is, it’s pretty confusing.

Willbriggie State Forest is immediately west of Darlington Point, between Narrandera and Hay in south-west New South Wales. A thin sliver of bushland clings to the river.

Darlington Point is just 3km off the Sturt Highway, on the northern side. Take the Kidman Way turnoff and you’ll be there in just a few minutes.

In 2010, four state forests were combined to form the Murrumbidgee Valley Regional Park… Hay, Narrandera, Willbriggie and Wooloondool State Forests. You can still see lots of stumps from when this area was selectively logged, however the trees have grown back quickly and the bush is quite thick in places.

Willbriggie is such a contrast to the endless plains surrounding it. You disappear into the river red gum and black box forest, and could be a million miles from anywhere.

The river meanders through the bush and you really are spoilt for camping spots. We had a similar experience at Birdcage Reserve. However, Willbriggie is a lot quieter because it’s well off the Sturt Highway.

There’s dozens of campsites along the track. You can choose to be high on a bank overlooking the river, or be down on the edge of a sandy beach on one of the river bends.

We chose a spot on top of a high river bank. The weather was cold, so we didn’t really need access to swim or to launch our inflatable kayak. We’ll be back in warmer weather to get our kayak out and explore the river from the water.

There’s only one drop toilet at the eastern end (Darlington Point end) of Willbriggie, so you’ll need to be self-contained. And bring your own drinking water.

You can have camp fires in cooler months. With the weather turning cold while we were there, a campfire was moist welcome. The cool breeze coming off the river at night kept us on our toes!

And since we had a campfire, we decided to cook up a damper. What a feast!

We spoke to a couple of locals who told us Willbriggie is packed in the Christmas holidays, Easter and long weekends. A lot of families come down from Griffith and use it as a holiday spot.

So if you’re travelling, keep this in mind. You might want to avoid Willbriggie in those busy times.

We were surprised how busy the track was. Even in winter when we were there, several groups were camping along the river. Although being so spread out, we didn’t hear a sound from anyone else.

Willbriggie is a great option for a relaxing break or a stopover if you’re travelling across the Hay Plain. If you need a dose of riverside camping surrounded by bush after the endless Hay Plain, then call in and find your own quiet spot along the Murrumbidgee River.

We’ll be back to explore more places with both the Murrumbidgee Valley Regional Park and the National Park next time we’re passing through.

Willbriggie and the Murrumbidgee Valley Regional Park are on Wiradjuri Country.

For more NSW National Parks you can visit, go here.