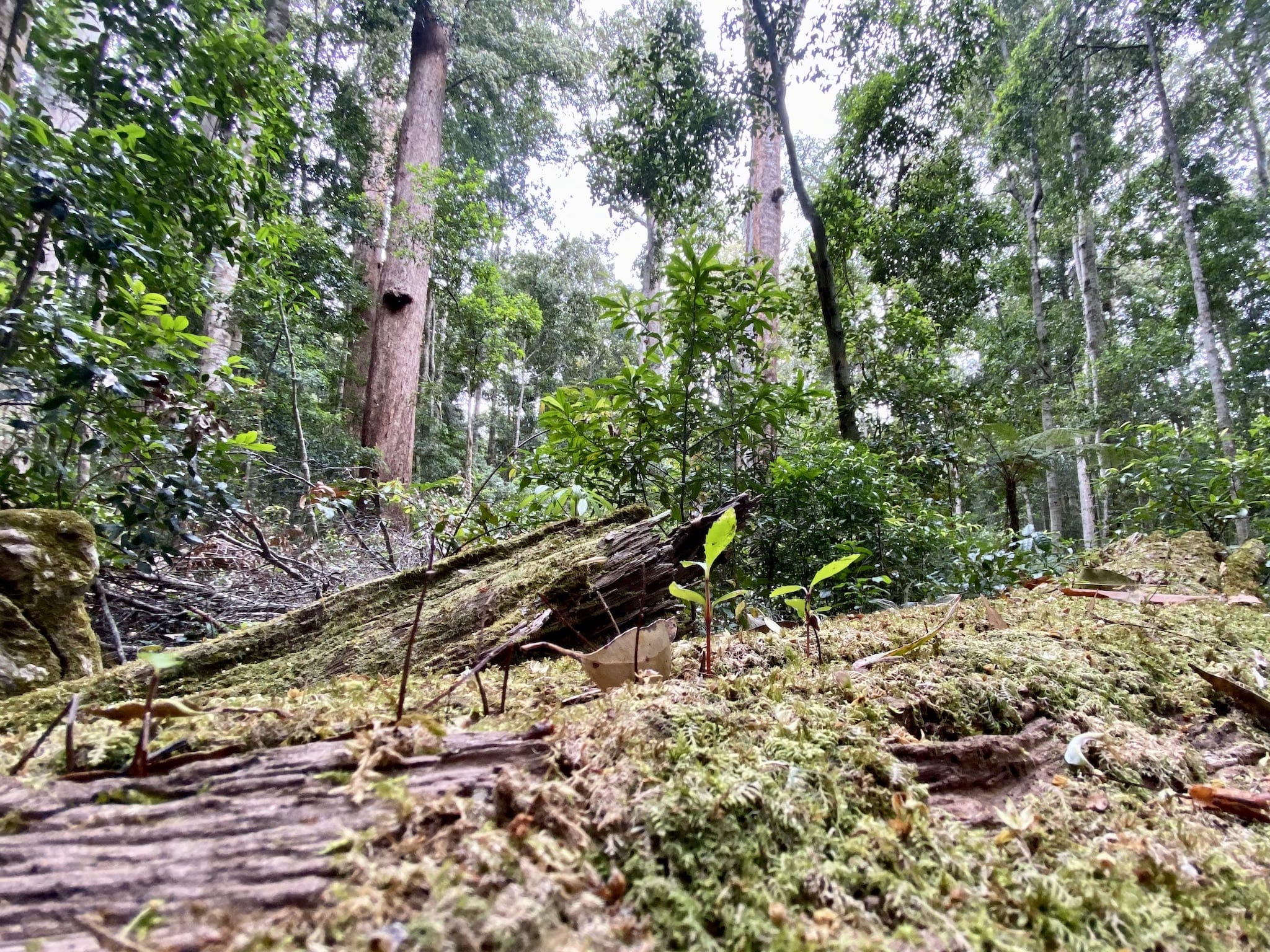 The Norman Jolly Memorial Grove is an island.

It’s an oasis, a reminder of what this country was like before white man landed on Australia’s shores and “improved” the land.

This tiny patch of old growth rainforest has somehow survived over 200 years of land clearing and forestry.

The Memorial Grove is a rainforest wonderland. It’s situated within the Nymboi-Binderay National Park, north of Dorrigo New South Wales (and just off the road to Platypus Flat Campground).

We saw an interpretive sign a few days later at Dorrigo National Park, which summed up our own thoughts. To paraphrase, Indigenous people saw rainforests as a protective canopy over Country. First settlers called it impenetrable scrub.

Norm Jolly was a forester in the early 20th century. A man of integrity, Jolly was a pioneer in forestry practices and often clashed with NSW government officials in his role as NSW Forestry Commissioner.

He understood the critical role rainforests play and was dismayed at the wholesale land clearing for farming. This was at odds with his masters, who wanted the land “opened up” and made “productive”.

The Norman Jolly Memorial Grove is a tribute to a man who had the vision to see how important old growth rainforest environments are. A man ahead of his times.

Why does it even exist? Well, it started as a seed bank and study area for the forestry industry, evolved into a natural reserve then was finally incorporated into the Nymoi-Binderay National Park.

Just a few steps from the car park, you’re into another world… a mystical landscape of huge old trees, dense layers of rotting vegetation underfoot and vigorous growth in every nook and cranny.

The short Coachwood Loop track leads you deeper into this beautiful world. Some of the tallow wood and brush box trees are simply enormous.

They were young saplings way back in medieval times, relics from the 12th century or earlier. And they’re still there, protecting everything below them.

You’re looking at giant trees, up to 800 years old… a tiny remnant of old growth rainforest.

It’s easy to imagine the First Nations people walking through here, taking just enough bush tucker for their needs and leaving the rest to provide for future generations and the Country itself.

And it’s easy to imagine how this region was, not that long ago.

A Slap in the Face

You can experience similar beautiful rainforest by taking walks in nearby Dorrigo National Park. But somehow the Norman Jolly Memorial Grove is different.

Yes, it sits within a National Park. But the area is surrounded by logged forests. This means the old trees are gone. Huge trees over 800 years old, too tempting for the loggers to resist.

And somehow this was a slap in the face to us, a wake-up call.

While Nymboi-Binderay National Park is incredibly beautiful in its own right, the Memorial Grove feels more like a museum. It’s a place where it suddenly hit us… this whole region was once like this.

But most of it was cleared for agriculture. So the green rolling hills you see around Dorrigo are not what they seem. They’re certainly not natural and they’re not really healthy either, not in the long term.

You see, rainforests are incredibly important. All the dense growth on the forest floor in combination with those huge trees, are absolutely vital to the health of the region.

The trees provide a protective canopy, filtering the light and ensuring one species of plant doesn’t dominate and take over the forest floor. Occasionally a huge tree crashes to the ground, opening the canopy.

Seedlings shoot in the bright sunlight and compete with one another. Eventually a few plants grow tall enough to establish and grow skywards. Then it’s their turn to be the protectors of the forest floor.

And the fallen tree? It rots and adds more mulch and nutrients to the soil. Along the way it provides shelter for birds, reptiles and other animals. It also acts as a donor for the vital fungi and mosses, which play their role in the cycle.

And rainforests play another critical role.

All the mulch on the forest floor and the lack of sunlight mean the ground is always damp. A rainforest is a giant sponge, soaking up water. Then it slowly releases the water into creeks, rivers and the atmosphere.

Without rainforests, the water runs off more quickly. Big rains fall on the cleared land, run off into the creeks then disappear. Creeks and rivers dry up during a dry spell. Erosion damages the land and silts up the creeks, choking the creatures living in them.

By clearing the rainforests, this vital cycle of preservation is broken. The genie is out of the bottle and can’t be stuffed back in. The cycle is broken.

Even selective logging of the old-growth trees breaks this fragile cycle. Once light is allowed to stream onto the forest floor, the environment changes forever. Given enough light, invasive species like lantana thrive. They choke the young saplings, preventing them from eventually growing into massive protective trees.

So the rainforest is irreversibly changed. It dries out and withers to a shadow of its former self.

But since white man arrived just over 200 years ago, we’ve managed to destroy 75% of our precious rainforest.

And we keep destroying it, even now.

That’s why the Norman Jolly Memorial Grove stands out like a sore thumb. It shows what should be here. It’s a stark contrast to the surrounding bush, which has been irreversibly changed due to old-growth logging.

We cut down swathes of these majestic trees during World War 2 to make rifle butts and parts for fighter planes… the ultimate irony. We destroyed an ancient ecosystem, just so we could kill each other more efficiently.

It’s a stark reminder of how destructive the human race can be.

The Norman Jolly Memorial Grove is on Gumbaynggirr Country.