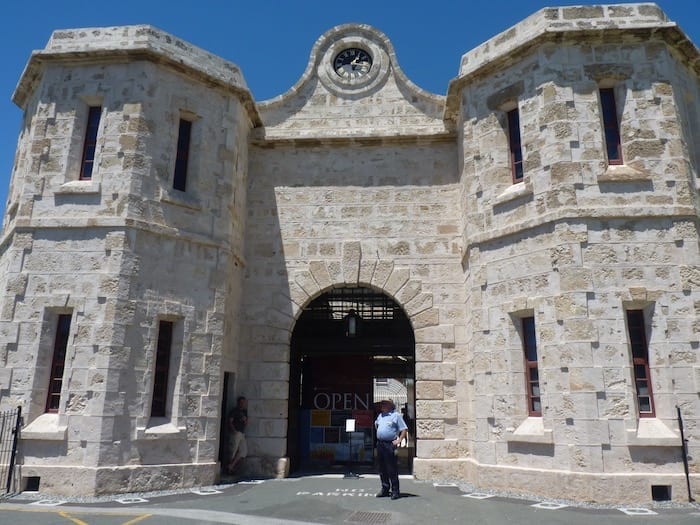 An Evil Place With A Hidden Underground World

Fremantle Prison (or Gaol) was an evil place. Barbaric living conditions, barbaric treatment and harsh punishment were the order of the day. Popular punishments included floggings, solitary confinement and working in chain gangs under supervision of armed guards.

Back in the 1840s, Western Australia had reluctantly agreed to accept convicts from Britain. Despite being a free settlement, the Swan River Colony desperately needed cheap (or free) labour. However, no permanent facility existed to house convicts. The Western Australian government had done what most governments still do to this day – adopted a policy without thinking through the consequences. The situation was so desperate that some convicts were forced to live on the ship in which they had been transported.

Consequently, convicts were press-ganged to build their own prison in 1851 – lucky them! Fremantle has an abundance of limestone. So the convicts were trained how to work with limestone, a quarry was established on site and work commenced.

By 1855 work was completed to the point where convicts could move in. They had successfully built their very own hell-hole. A North wing was added and the prison was complete by 1859. By 1886, the prison’s function had formally changed. Originally built to hold convicts, Fremantle Prison’s new role was to house prisoners who had been sentenced locally.

One thing sorely lacking in Fremantle and indeed greater Perth was surface water fit for drinking. Convicts were conscripted to dig tunnels under the prison to access an aquifer. It may be the only prison that actively encouraged prisoners to dig tunnels… This provided drinking water for the prison and later was expanded to supply the entire town with drinking water.

Fremantle Prison was closed in 1991. Nothing much changed within the walls of that prison over its 140 year lifespan. Overcrowding, brutality and the occasional riot dogged the prison from the beginning.

These days, the prison is a Heritage Listed building and daily prison tours are conducted. A tour of the underground tunnels is a must-do activity if you’re visiting the prison. They are a hidden treat – totally unexpected.

A Labyrinth Of Tunnels… And More Brutality

Once below the surface, the extent of the tunnels will blow your mind. Over 1 kilometre of tunnels were dug by hand – all through solid limestone. Access is via a single 20 metre vertical shaft. The idea was to dig a horizontal lattice, let water leach out of the limestone and collect in the tunnels. Then it had to be pumped to the surface. This is where things get really ugly.

Someone had the bright idea of using the “worst of the worst” prisoners to pump the water to the surface – by hand. Two shackled inmates would be sent down the shaft and spend 12 hours per day pumping water. Think of the old hand-powered rail carts you see in black and white movies – one person either side of a see-saw beam. Then imagine doing this underground in the dark for 12 hours without a break… and being shackled with chains to your workmate the whole time.

Well maybe not rapids. More like a really long pool… in the dark… 20m under a prison.

If you can set aside the brutality and bloodshed that created these tunnels, they are in fact a marvellous feat of engineering. Such a clever way to capture and store an essential resource.

The underground tour is unique. You’re kitted up in waterproof suits then you descend the ladder into the tunnels. Unlike the prisoners, you’re not shackled… but you are harnessed to the ladder in case you slip.

Once at tunnel level, the fun really starts. You climb into a 2 person canoe and follow the tour guide. It’s like being on your own private ride in a waterpark.

Unfortunately we didn’t have a waterproof camera, so our footage is a bit sparse. However this great video from Destination WA will give you a sense of what it’s like.

Maybe this should read, “Super-Squeezy”. Back above ground and in the prison proper, the cells have to be seen to be believed. Imagine living in a space 2.1 m x 1.2 m (7 ft x 4 ft), with no basin and no toilet. Unbelievably all toileting was done in a bucket right up until 1991, when the prison was shut down. The guide said former inmates still clearly remember the sound of 1,000 – 1,400 men all simultaneously peeing into their buckets. Imagine the smell!

At one stage, every second adjoining wall was removed. So the cells grew to a luxurious 2.1 m x 2.4 m. The trade-off? Every cell now had 2 prisoners per cell. One slept on the bed, the other on the floor. Oh, and still only one toileting bucket per cell. So you had to share a bucket!

Fremantle Prison is a sobering place. It’s a reminder of the brutality too often hidden behind the walls we build. The tunnels are awe-inspiring and could be a million miles away from the prison just 20m above. But the prison leaves you with a feeling of dread and a sense of how powerless and hopeless the inmates must have felt.

Fremantle Prison left me feeling a little confused. We had such a fun time exploring the tunnels – it was a unique experience. Yet once above ground, the prison is formidable and left me feeling unsettled. Whatever your feelings about this place, it’s certainly worth spending some time here. And make sure you take the tunnel tour!

If you’re looking to explore Fremantle and Perth further, TourRadar offer a one day tour.